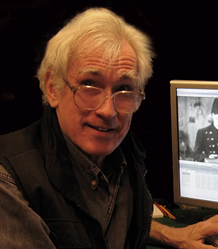 Paul Edwards (PhD Texas) is Director of Undergraduate Studies in the Department of Performance Studies. He is the recipient of the prestigious 2002 NU Alumni Excellence in Teaching Award and he oversees the teaching of the department’s introductory course 103 – The Analysis and Performance of Literature. His research and teaching are in the study of literature through performance (Shakespeare, 19th and 20th century European and American fiction) and the adaptation of fiction for stage and screen. He has directed more than forty original stage adaptations of fiction for campus and professional settings. His adaptation of John Barth’s The End of the Road received a 1993 Joseph Jefferson Citation (for non-Equity production), and his adaptation of Geoff Ryman’s Was received a 1996 Joseph Jefferson Award (for Equity production) and an After Dark Award. From the National Communication Association he has received two awards: in 1997, the Leslie Irene Coger Award, honoring lifetime achievement in performance, and in 2001, the Lilla A. Heston Award for outstanding scholarship in performance studies. Essays and monographs have appeared in such publications as Shakespeare Quarterly, Text and Performance Quarterly, and Theatre Annual.