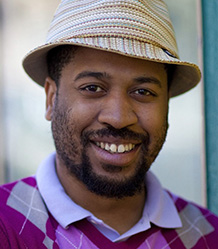 Thomas Bradshaw (MFA, Brooklyn College) joins the Department of Radio/Television/Film from Medgar Evers College in New York, where he was an assistant professor. Bradshaw is a playwright, the recipient of a 2009 Guggenheim Fellowship and the 2010 Prince Charitable Trust Prize. He is the author of Mary, which premiered at the Goodman Theatre in 2010; The Ashes; The Bereaved, which was named one of the Best Plays of 2009 by Time Out New York and was a New York Times Critic’s Pick; and Southern Promises and Dawn, both listed among the Best Performances of Stage and Screen for 2008 in The New Yorker. His other works have included Prophet, Strom Thurmond Is Not a Racist, Cleansed, Purity, and Job. Bradshaw has been featured as one of Time Out New York’s ten playwrights to watch, as one of Paper Magazine’s Beautiful People, and as Best Provocative Playwright in the Village Voice. Bradshaw’s play Intimacy premiered off-Broadway as part of The New Group’s season. He was included in NewCity Film Magazine’s list of Chicago’s 50 Screen Gems of 2014. Professor Bradshaw is working on adapting Uncle Tom’s Cabin into a miniseries for UNEAC Films, as well as creating an original television series for HBO and Harpo Films. His new play Carlyle will premiere spring 2016 at the Goodman Theatre after a successful reading series in winter 2015.