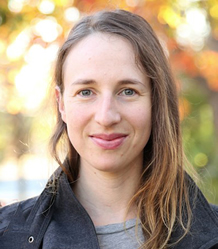 Ariel Stess is a playwright and director originally from Santa Fe, New Mexico. Her work has been produced and/or developed at Playwrights Horizons, The Bushwick Starr, New Georges, Clubbed Thumb, Mabou Mines, and The Playwrights’ Center. She is a 2018-21 Core Writer of the Playwrights’ Center, a member of the 2026 class of New Dramatists, and a New Georges Affiliated Artist. Her plays include Tranquil, 4 Women, The World My Mama Raised (Clubbed Thumb), Heartbreak (The Bushwick Starr, co-produced by New Georges, Time Out New York Critics’ Pick), and I’m Pretty F*cked Up (Clubbed Thumb, Five Stars Time Out New York). Ariel received her BA from Bard College and her MFA in playwriting from Brooklyn College. Her writing has appeared in The Brooklyn Rail and Culturebot.