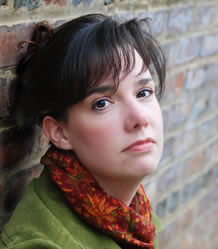 Mia McCullough is the author of over 20 plays and 9 screenplays, some of which were written when she was studying in the Creative Writing for the Media program at Northwestern in the early 90s. Her plays have been produced in Chicago at Steppenwolf Theatre, Chicago Dramatists, and Stage Left Theatre, as well as around the country at such theatres as The Old Globe and Mo’olelo Performing Arts Company in San Diego, InterAct in Philadelphia, and Actors Express in Atlanta. She has been the recipient of various awards including the American Theatre Critics Association’s Osborn Award, a Joseph Jefferson Award for Best New Work, and first prize in the Julie Harris Playwriting Competition. Ms. McCullough also teaches playwriting workshops in Chicago Public High Schools through Chicago Dramatists’ Outreach program.