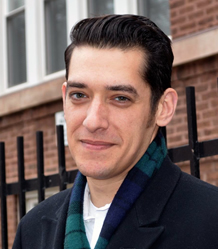 Neil Verma is an assistant professor of sound studies in the Department of Radio/Television/Film. He also serves as core faculty in Comparative Literary Studies and as associate director of the MA in Sound Arts and Industries. Verma is the author of Theater of the Mind: Imagination, Aesthetics, and American Radio Drama (Chicago, 2012), co-editor of Anatomy of Sound: Norman Corwin and Media Authorship (California, 2016), and co-editor of Indian Sound Cultures, Indian Sound Citizenship (Michigan, 2020). His books have won the Best First Book award from SCMS and Best Moving Image Book award from the Krazsna-Krausz Foundation. He specializes in the history of radio drama and has also written on topics from film noir and podcasting to television aesthetics and literary history in such journals as Critical Quarterly, Journal of American Studies, Journal of Sonic Studies, Participations, and Velvet Light Trap, as well as in several edited volumes. In 2017, he won a Digital Humanities Advancement grant from the NEH to develop digital tools for analysis of text in performance and in 2019, he co-edited a special issue of [In]Transition on audiographic criticism. Verma founded the Great Lakes Association for Sound Studies (GLASS) and currently serves as Conference Director for the Radio Preservation Task Force (RPTF) at the Library of Congress. Verma maintains a practice in creative field recording, and his experimental work has aired on Radiophrenia, Resonance FM, WaveFarm, and elsewhere. In 2020, he was named Editor of the RadioDoc Review. Verma earned his PhD at the University of Chicago, where he was also a Harper-Schmidt postdoctoral fellow. He is currently writing a book about podcasting.