Alexandra Joyce is a playwright/actor from Chicago, IL. After graduating from the University of Notre Dame with degrees in Spanish and Film, Television, and Theatre, she moved to Santiago, Chile, where she lived for the next year and a half. In Santiago, she taught English and collaborated with the musical theatre department at an all-girls bilingual school. She also served as the teacher’s assistant for a devised theatre course at La Universidad Católica and worked as the assistant director for the South American premiere of Tuko Tuko by Anton Juan. Her play, La Victoria, was inspired by her research in Santiago and narrates the experience of theatre artists who used their craft as a revolutionary tool to protest the Pinochet dictatorship. Alex is currently directing children’s theatre in her hometown. 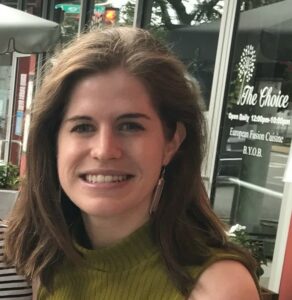 Allison Theveny. As an aspiring film and television writer, Allison has enrolled in Northwestern’s Writing for the Screen and stage MFA program, where she must hone and seek connections among all forms of dramatic writing. Prior to beginning the program, Allison spent almost four years in Washington, D.C., performing improv, working in development at the Folger Shakespeare Library, and serving as Dr. Alan Greenspan’s executive assistant. This past year, Allison interned at the Chicago-based production company Full Spectrum Features, volunteered for the Sundance Film Festival, and was one of five finalists named in the BlueCat Short Screenplay Competition. The selected script, Hat Weather, showcases a lot of what marks Allison’s writing as unique. It is allegorical, atmospheric, determined to surprise and unmoor, ready to make your heart ache and soar, and interested in the relationship between fear, shame, and power. In general, Allison’s writing seeks to mix the scope and symbolic resonance of The Leftovers and Pan’s Labyrinth with the dark, but wry character work of Barry and Fleabag and the twisty narrative satisfaction of Dead to Me and Gone Girl.  This summer, Allison is interning for FilmNation Entertainment and screenwriter and playwright Sarah Gubbins. She is a proud graduate of Georgetown University, whose Film and Media Studies minor program first allowed her to imagine what might happen if she tried to turn her secret dream of writing for the screen into a reality. 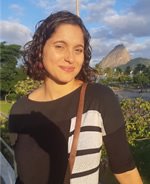 Clara Deák is a Brazilian screenwriter, born and raised in Rio de Janeiro. She started her career writing for Brazilian sitcom “Cilada”. Later, she won a pitching contest for OiTV, with a web series she co-created called “Status: Single”, which helped establish her career in the Brazilian market. In the past years, she wrote for several shows, mostly comedies. Recently, she was an assistant writer for Netflix “Most Beautiful Thing” and a staff writer for HBO Latin America terror show “Esquecidos”. After a few years in the field, she decided it was time to go back to studies and focus on her own original works. She received a Fulbright scholarship to pursue her postgraduate degree. 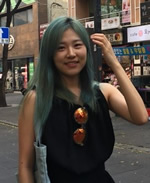 Gahee Lee is a Korean screenwriter who loves to write about weird characters with an awkward sense of humor. She completed her B.A. in Korean Language/Literature Education at the Seoul National University and worked at a government-affiliated institute, writing media releases and political speeches. As she found her passion in scriptwriting and changed her career path, she completed courses at Korea Scenario Writers Association and won several prizes in scriptwriting competitions in Korea, including the Grand Prize at Naju province and Honorable Mention at the Shin Young Kyun Art Foundation, and sold her first feature in 2019. In 2020, her dark fantasy script “Time Museum” won Best Sci-Fi Script at the Hollywood Just4Shorts Competition, Best Short Screenplay at the Festigious Film Festival, Honorable Mention at the Los Angeles Film Awards, Best Short Script at the European Independent Film Festival, Best Short Script at the Druk International Film Festival, and Honorable Mention at the California International Shorts Festival. Her dark comedy script “A Creep” was officially selected at several film festivals, such as the Austin Comedy Short Film Festival and the Houston Comedy Film Festival. She was selected as a grantee of the Korean Government Scholarship Program for Overseas Study in 2019 and came here to write something new, different, and fun while challenging herself.

Gwyneth Forsythe was born in the middle of a tornado bouncing storm on Midsummer’s Day in 1997. She graduated from the University of Iowa in 2019 with BA in Theatre Arts and History with hard-won honors in both. She is the recipient of a VSA Playwright Discovery Award 2014 from the Kennedy Center, the Iowa Center of the Arts Scholarship 2017, Tennessee Williams Scholarship 2018, and the Lorena Bach Scholarship 2018.  Her play Messenger: The MI5 Girl was produced at the University of Iowa’s theater program, where she also stage-managed four productions. She was the Drama Editor at earthwords: the undergraduate literary review, and has worked as a script supervisor on the short film Sexpert Franzen.  If you’re looking for her you can find her hanging out with her dogs, re-watching Good Omens, or dreaming about wherever she’ll be traveling next. 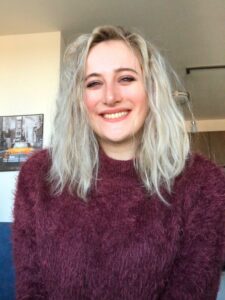 Hayley Sigmon graduated from the University of North Carolina at Chapel Hill in 2019, where she earned BAs in communications and film studies. She minored in creative writing and was her graduating class’s sole recipient of the Thomas Wolfe Scholarship. While at UNC, she wrote, produced, and directed numerous student productions, notably her short film, Phoenix, which won Best Picture, Best Director, and Best Screenplay at the Carolina Film Association’s end-of-the-year showcase in 2019. She was also the showrunner of two student television shows. While her roots are in prose, Hayley’s visual storytelling guided her into screenwriting. She writes atmospheric stories in which the setting plays as key a role as any character, and loves exploring antiheroines just as complicated as their male counterparts in the golden age of television. 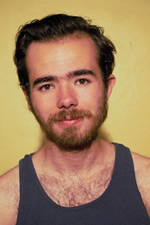 Henry Bender is a writer/actor/director/hobgoblin from Albuquerque, New Mexico. For four of the past five years he attended the University of New Mexico, where, among many other things, he wrote, directed, and produced his first full-length, Coyote Starts A Punk Band (And Also Saves The World). For the fifth year he has been writing various stage, screen, and video-game scripts, acting in the New Mexico Shakespeare Festival, and organizing immersive performance-art parties through a collective called “The Unemployment Agency”. Henry is attending Northwestern because he hopes to build the work ethic needed to make the world a nicer place through storytelling. He is interested in writing movies, tv-shows, plays, podcasts, and puppet shows about queerness, overcoming trauma, and the radical notion that people should be kind to each other: all while supplanting typical heroes with the people who have typically lived on society’s margins. 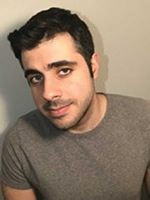 Niv Elbaz is a writer and a third world culture kid who was born in Israel but was raised in Thailand. Niv received a B.A in Playwriting from Columbia College Chicago, where a wide selection of his work was produced. His significant work includes his play The Waiter of Le Majestique (2018) which was chosen as one of two playwriting senior showcase shows at Columbia College and his play Lightning (2018) which was performed at Victory Gardens Theater. He enjoys cycling, gaming, and eating international food in no particular order. 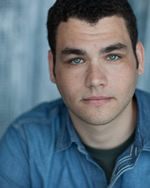 Peter Ronson is a writer and comedian based in Chicago, Illinois. Born in New York City, Peter received a BA from The College of William and Mary in 2015, with a major in government and a minor in theater. He performed improv in college and spent a semester in Chicago, participating in the Comedy Studies program at Second City Theater, where he later completed the Conservatory program. After graduating, Peter moved back to Chicago, where he performs improv, sketch, and standup comedy at venues across the city. Since 2017, Peter has been co-hosting and producing a weekly comedy and political discussion podcast, called The News Never Ends. The show features comedy sketches and conversations with local comedians, journalists, and activists. 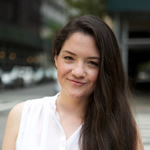 Ruby Hutson-Ellenberg is a playwright and storyteller from Queens, New York. She graduated from CUNY at Hunter College in 2016 with a B.A. in English. Since graduating, she’s worked at a due-diligence firm in midtown Manhattan, most recently as senior editor summarizing and reviewing first-person interviews for institutional investors. Her original play Eve and Her Neighbors won Hunter College’s 2015 Andrew and Eleanor McGlinchee second place prize for a play. It was later produced at The Kraine Theater on the Lower East side during The 2016 NY International Fringe Festival. She has worked as a production intern at the Mint Theater on 42d Street in Manhattan, which produces forgotten plays from the past, and performed at storytelling events around New York. 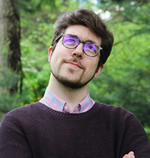 Skyler Tarnas is a Michigan-born-and-raised writer, director, and performer with passions for Shakespeare, true crime, and fake crime. He graduated from the University of Michigan in 2017, having produced several of his works with the university group the RC Players, and was awarded the Roy W. Cowden Fellowship and the James H. Robertson Award for distinctive performance in drama and creative writing. His short comedy “Anarchy at the Hearty Toadstool” was performed at the 2016 Edinburgh Fringe Festival and his play “He Said She Said” received a staged reading at Theatre Nova’s 2019 Michigan Playwrights Festival. Skyler also interned for Detroit Public Theatre, as well as directing and producing a handful of independent productions in Ann Arbor. Recently, his play “Millennials are Killing” was a semi-finalist for the Garry Marshall Theatre 2020 New Works Festival. Skyler enjoys writing murder-filled and wacky plays that seek to explore the young confused queer experience.