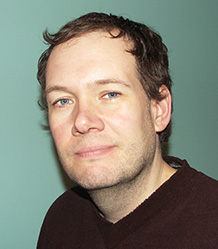 Erik Gernand is a playwright and filmmaker whose award-winning short films have screened at more than 100 film festivals around the world including SXSW, Mix Milan (Italy), Cinequest, and Outfest LGBT Film Festival, as well as been broadcast on IFC, PBS, and the Logo Channel and distributed by First Run Features and Strand Releasing. His plays have been produced in New York, Chicago, Miami, and Washington DC. “The Beautiful Dark” was hailed by The New York Times as “Affecting, thought-provoking… Mr. Gernand has created complicated, recognizable characters who are, like most of us, victims of their own flaws.” As an educator, Erik is a recipient of a Galbut Outstanding Faculty Award and a Charles Deering McCormick Lectureship at Northwestern University.